Imagine a live concert video featuring a new song from a four-piece gothic-rock inspired band filmed entirely on location at an ancient monastary. Then -- after seeing and hearing it -- imagine that none of this exists. So it is with Midnight Meridian - HornetLab's current music/animation project.

Born from what remained after Dark Franklin's last CD, What Remains, Midnight Meridian continues in the gothic music inspired genre with a new project filled with sight, sound and technology.

With the rise of the Internet, songwriters and indie bands have resources and opportunities like never before to express themselves to a new worldwide audience. That, along with the explosive growth of technology and computer software, makes it possible to present an entirely new type of musical project to fans everywhere looking for something a little different from the mainstream. Now with "Into the Night", Midnight Meridian explores a new twist on an old idea of a concert video.

Bill Jablonsky (keyboards,vocals) from the Long Island, New York-based gothic/electronic band Dark Franklin had begun writing material to contribute to what was to be the fourth CD release from the band. As it happened though, his long-time songwriting partner had become quite involved in other local musical projects and was unavailable. Having previously produced the 3D-Animated music video "Odysseys" from the latest Dark Franklin release, What Remains, Bill chose to embark on a new music/video project of his own.

"I thought it would be interesting to put together a whole new band from scratch, but instead of real musicians, why not have animated virtual band members?" recalls Bill.

Once that idea took hold, it was time to actually put these characters together along with the appropriate look and personality of each virtual musician. A concert venue would be needed too, as well as a bit of a "back story" to make it a little more interesting.

"I searched around the world for mysterious sort of places where I might want to have a concert myself and I came across the country of Bulgaria in Southeast Europe. It was very interesting to look at their tourist websites and their history and I thought that this would be a nice place to visit -- even if only for a virtual concert," Bill explained.

Of course, a song would also be needed for a music video. A suitable prospect was chosen from among some of the rough drafts that had been created for a possible "Dark Franklin 4" CD. "Into the Night" seemed to be the best pick for a concert that takes place during an evening show at an old monastary in Bulgaria.

Production took some time. Between getting the band assembled and constructing a concert venue -- as well as recording the song -- it was sometimes suggested that putting a real band together and booking a place would have been quicker.

But now finally, the video is complete and ready for public viewing. Who knows just what will be next to come out of Midnight Meridian and HornetLab?

A band such as Midnight Meridian needs a suitable place to showcase their talent. Our location scouts searched far and wide for a place that has the right look and feel for the music that is to come. The fact that such a place does not really exist is not too much a hindrance. Although the concert will take place at night, here is the tentative location in daylight.

Setting up the Stage

Even virtual players need their instruments and equipment set up for maximum efficiency and comfort. A big issue is making sure that the lighting and ambience is properly managed.

A related project is the online virtual stage set using the free Unity 3D web player. When complete, the viewer can watch the concert while walking around and interacting with the virtual concert hall. See the early version here.

Putting the Band Together

In order to perform the music made specifically for the video, a four piece band would be required. Here are the band members in their final form. From left to right Charles Radcliff (keyboards/lead vocals), Roger Colpitts (drums), Allen Hartley (guitar/vocals),Elisa Pierce (bass/vocals). Although that takes care of all of the instruments in the virtual band, this has -- in reality -- no correlation to how the music was actually recorded..

The look and feel of the characters and scenery evolved over time. 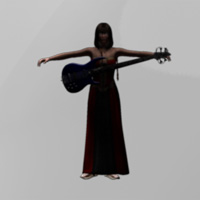 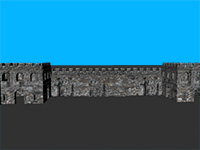 Midnight Meridian is a new musical project influenced by the gothic music genre as well as related styles. It is a band that -- other than the lead vocals -- is produced entirely with electronic musical instruments and computer based recording technology.

As the music is entirely made with digital electronics, an intriguing idea was to produce a music video that is equally virtual in nature.

Using only 3D animation and visual effects software, the goal was to produce a video that is as realistic as possible while still being artistically interesting. The hope is that the music and video may be enjoyed in the traditional way by music fans everywhere, but in addition, be enjoyed by fans of digital animation and CGI.

When is the Video Coming out?
After a few delays and an admittedly poor estimation of production time, the video is finally finished. You can check it out at midnightmeridian.com

What tOOK so long?
There was much work to be done -- -not the least of which was writing and recording the song for the video. Even more involved is the video itself. The characters need to be put together, dressed, and textured and adjusted for the right look. Also, the stage and the venue had to be assembled along with their instruments. The animations and interactions need to be produced. Lighting a virtual concert also presents some technical and creative challenges too. In addition, a big yet interesting issue is the entire back-story of the band -- who they are, what they do.
HornetLab is responsible for every facet of the production. Being a very small operation, it is a long but interesting journey.

DO YOU MAKE EVERY 3D Model From Scratch?
No. Nearly all of the 3D meshes and other 3D assets that you see are in fact made by third-party modellers and artists that HornetLab deals with. Modelling is a very time consuming, yet interesting 3D specialty. But due to time constraints and other practical considerations, HornetLab is focused more on the layout, animation, setup, lighting, compositing and rendering of the video and giving it the right look and feel. As an analogy, the instruments that a band plays are often not made by the band members themselves -- only played by them.

Where does the video take place?
It is not exactly clear at the moment. RIght now, the thinking is that it takes place at some old monastary or cloisters in a scenic and mysterious place somwhere in Bulgaria. Whether the monastary is a thousand years old and abandoned or perhaps only a hundred years old and still active is left for the viewer to imagine. The fact that it does not exist anywhere in reality gives one lots of flexibility.